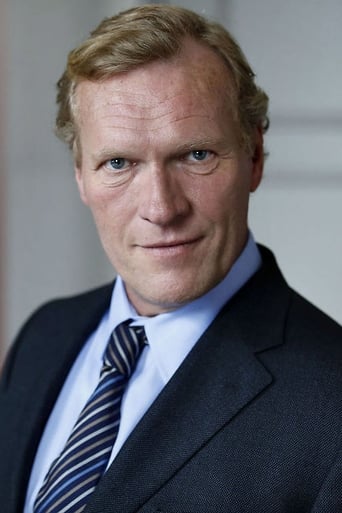 This Norwegian actor is an employee of Oslo Nye Teater (Oslo's New Theatre) since 1981. On stage he has starred in everything from Shakespeare to modern drama like Tennessee William's The Glass Menagerie, and musicals like Guys and Dolls. Got his big breakthrough as a Norwegian resistance fighter in the suspenseful WWII mini-series "Röd snö" in 1985. In 1993-97 he starred as Nils in "Mot i brøstet", if not the best, certainly one of the most popular Norwegian sitcom's off all time, even resulting in him getting a snack named after his character! On the big screen he also got the chance to act opposite Robert Mitchum and Cliff Robertson in the Norwegian movie "Pakten" in 1995. In 2001 he played an arctic explorer opposite Kenneth Branagh's Ernest Shackleton in the large-scale TV-production "Shackleton". 2001 also saw his biggest success on screen yet, when he starred as the slightly retarted Kjell-Bjarne in "Elling". The movie was seen by over 800,000 Norwegian cinema-goers (in a country with just 4.2 million people) and also became the most successful Norwegian film ever shown in Sweden and Denmark. In 2002 Nordin joined his co-star Per Christian Ellefsen, director Petter Næss and producer Dag Alveberg on a trip to Hollywood, celebrating the movie's Academy Award nomination for Best Foreign Language Film. - IMDb Mini Biography